Organized Religion does that to me too 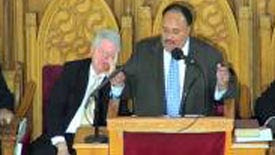 Cameras caught Pres. Bill Clinton nodding off at the Convent Avenue Baptist Church in Harlem on Sunday. Video shows the former president sleeping while Martin Luther King Junior's son talks about his father's legacy. Clinton woke up when his elbow slipped off the arm of his chair. The video shows he caught himself and recovered nicely, but he's obviously sleepy.

In the past, cameras caught him nodding off during Ronald Reagan's funeral, and during a Mets game.

Poor guy, one lethal combination of age and religion. I felt equal sympathy when George Bush #1 puked in the lap of the Japanese Prime Minister.
Posted by Mnmom