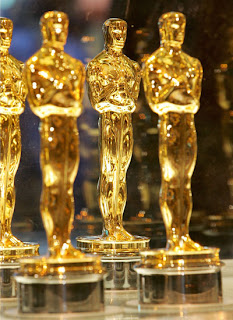 Nothing I like better than passing smug judgement on rich celebs, while sitting in my sweats - on the sofa - with my bad hair and acne.

Octavia Spencer looks perfect!
I love Molly McCarthy!  Or Melissa.  Or whatever her name is.
I see a lot of women who need to eat something.  Do you men really find that skeletal look attractive?
6:30 and all I can say is boring, boring, boring.
"Who are you wearing?" has to be the most pretentious phrase every spoken.
Michelle Williams looks like she pulled her dress from her daughter's dress-up box.
Max Von Sydow's date is one HOT older woman.
Kristen Whig and the woman who cowrote her movie have exactly the same hair and the most boring dresses ever.  Isn't everyone just over that hair style yet?
George Clooney's date has bigger shoulders than he does.
Who are all those non-celebs?
Instead of wasting all that fossil fuel on SUV limos, couldn't they just use a big city bus to round up all those movie stars?
Sandra Bullock never fails.
The whole grain waffles I made this morning are giving me some killer gas - just thought I'd throw that in there.
Lovin Chris Rock's retro afro.  He looks like The Jefferson's son Lionel.
I like Billy Crystal, but he's starting to look like Christopher Walken.   He needs to quit dying his hair with shoe polish.
NOT a Gwyneth Paltrow fan.
Posted by Mnmom 7 comments: