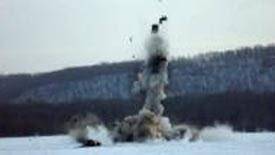 A Minnesota man faces some serious charges after creating and detonating a homemade bomb on his own property. If you watch the video, you can hear his friends whooping it up in the background. This is something I could see my family doing. Albeit on a much smaller scale.

In my opinion, this is a case of a very bored Minnesotan, not some terrorist. The Feds in DC have no idea what deep winter is like. I'm ready to blow something up and it's not even February. I'll have to settle for burning popcorn in the microwave. I'm hoping that common sense will prevail and they won't throw the book at him. Make him do some community service - actually, make him help track down REAL terrorists trying to buy this stuff on the internet. Or train him for the bomb squad. Obviously the guy has some talents to contribute.
Posted by Mnmom

Okay, but the wise Norwegian men of the Astoria, WA area beat this guy. Years ago they decided the best way to dispose of the beached several-ton whale was to pack it with dynomite and blow it to shreds. Well, it blew up all right, and scattered very large chunks of blubber all over the area, denting some car roofs and damaging property. So when we were out there last fall, they had another beached whale to take care of, this time around they dug a huge, huge hole in the beach and roll in him with the help of a backhoe!

I remember that!!! I think I've even seen the video.

Here is what wikipedia had to say about the exploding whales...

Exploding whales have been documented on two notable occasions, as well as several lesser-known ones. The most famous explosion occurred in the United States at Florence, Oregon, in 1970, when a dead sperm whale (originally reported as a gray whale) was blown up by the Oregon Highway Division in an attempt to dispose of its rotting carcass. This incident became famous in the U.S. when American humorist Dave Barry wrote about it in his newspaper column after viewing a videotape of television footage of the explosion. It later became well-known internationally when the same footage circulated on the Internet.

There have also been spontaneous explosions. The other best-reported case of an exploding whale was in Taiwan in 2004, when a buildup of gas inside a decomposing sperm whale caused it to explode while it was being transported for a post-mortem examination. As exploding whales are an interesting and absurd topic, they have been written about by several authors.