Once again, my Iowa Hawkeyes have beaten back our rival Iowa State Cyclones 35-3!

The game was played in Ames, Iowa, home of the Iowa State Cyclones, at the Jack Trice stadium. Which is a good story: the following is plagiarized from various sources. 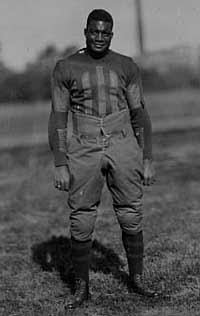 Jack Trice, Iowa State’s first black athlete, was also the first athlete to die for Iowa State. On the night of his first football game, October 5, 1923, Jack wrote in a letter on some hotel stationery, “My thoughts just before the first real college game of my life: The honor of my race, family & self is at stake. Everyone is expecting me to do big things. I will. My whole body and soul are to be thrown recklessly about the field tomorrow. Every time the ball is snapped, I will be trying to do more than my part. On all defensive plays I must break thru the opponents' line and stop the play in their territory. Beware of mass interference. Fight low, with your eyes open and toward the play. Watch out for crossbucks and reverse end runs. Be on your toes every minute if you expect to make good.”

It was ISU's third game that season; previous teams had refused to play against a black player. On the night of the game, Trice had to stay at a different Minneapolis hotel from his teammates.

During the first half of the game he had so anticipated, Trice suffered a broken collarbone. He continued to play during the third quarter, until he was thrown on his back and trampled by three Minnesota players. He died three days later. Four thousand students and faculty members attended his funeral service on central campus.

As a result of his death, ISU did not renew their contract to play against Minnesota after the 1924 game. They would not play again until 1989.

In 1973, Jack Trice’s legacy was renewed and a promotion began to name ISU's new stadium after him. In 1974, ISU's student body government voted unanimously to endorse this effort. In addition, the Jack Trice Stadium Committee compiled more than 3,000 signatures from supporters. However, an ISU ad hoc committee voted to advise then-ISU President W. Robert Parks to name the stadium "Cyclone Stadium".

In 1984, the stadium was lamely named Cyclone Stadium and the playing field was named “Jack Trice Field.” in a retarded attempt to appease history. The ISU student body government, wanting to do more to honor Trice, raised money to erect a statue of Trice in 1987. Due to the persistence of the student body government, students, alumni, faculty and staff, and other supporters (including public figures such as Paul Newman and Hubert Humphrey (a guilty Minnesotan), the football stadium at ISU was finally named Jack Trice Stadium in 1997. 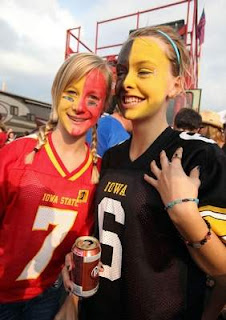 Even though they are arch rivals, IOWA HAWKEYES and IOWA STATE CYCLONES have to get along. Because everyone misunderstands and underestimates folks from Iowa.
So it's us against the world. 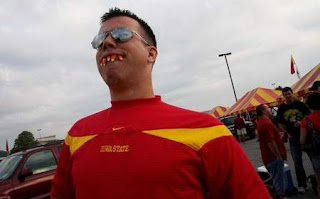 Iowans - we so corny!
Posted by Mnmom

Never knew that story! I feel bad! Thanks for posting it!

Wow! That is a story that should be told!

And as Beth said, go Gophs!

I had no idea about any of that. Thanks for the information. I was just glad they played there instead of here. As you probably remember, this town is insane during the Iowa/Iowa State game weekend.