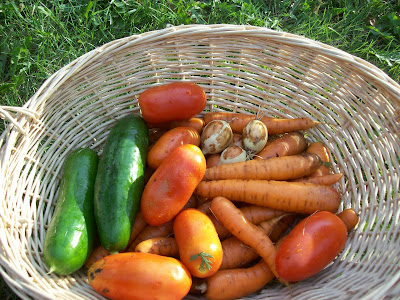 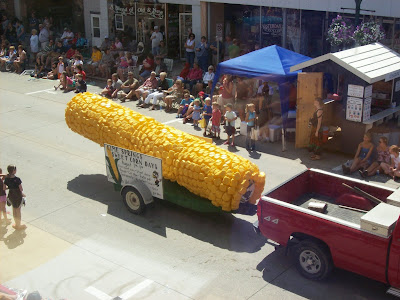 Tonight's bounty from my garden: two big cucs, five small sweet onions, 4 good sized plum tomatoes, and PILES of beautiful carrots!! The tomatoes are ripening up as we speak, and soon I'll be able to stew up plenty of plum tomatoes for homemade marinara. The cucs are just getting started, and the carrots are done. I planted more beets, and some more lettuce and spinach for fall. 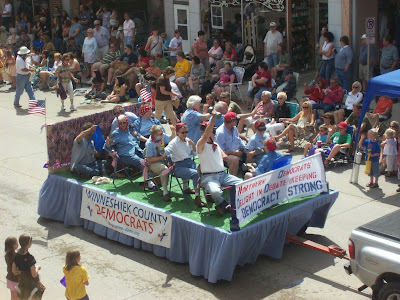 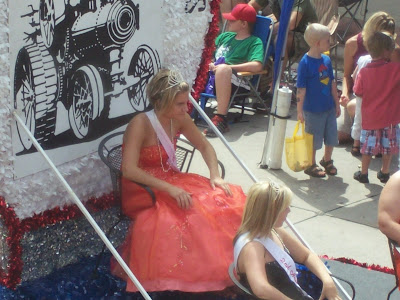 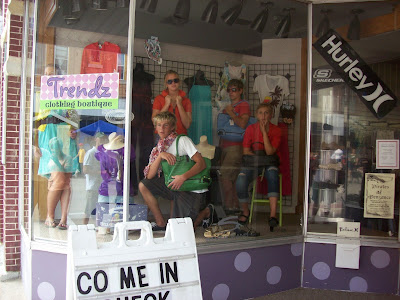 And now some photos from the Nordic Fest. This is a giant ear of corn, because it WAS Iowa after all. 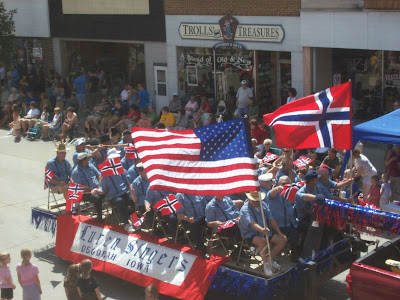 The Winneshiek County Democrats of Decorah Iowa, keeping Democracy strong and halting the spread of neo-facism in the Heartland.


Isn't this the most pathetic queen you've ever seen? Her utter disdain for the whole parade scene is just so evident. They need to give those crowns to middle-aged women like me. I'd have whooped it up and given those folks a SHOW!!!

These are local teens doing live modeling in a downtown clothing store. The handsome chap with the green man-purse is my nephew E. By the time I found him that afternoon, he was done modeling. I stated I was really sad because I wanted a photo, so he excitedly said "I'll go back!" which he promptly did and crawled back in the window for his auntie. Isn't he a good boy?


These are the famous Luren Singers from Decorah. It started as a Norwegian mens singing group, but they've lowered their standards and now they'll take Swedes, Germans, etc. Just as long as you're an old guy and can sing, you're in!
Posted by Mnmom

I have garden envy. We only put in tomatoes this year, and an unknown vine, it may be some kind of squash, we'll see! Your garden bounty is gorgeous!

Those photos are awesome. I like the giant ear of corn and the disdainful princess the best. I'm so in love with Iowa.

That giant ear of corn is taunting me. Our sweet corn still hasn't come in here yet. I've been waiting so patiently.

OMG, I love it. Great photos and even better commentary. :)

Great photos! Reminds me of my childhood growing up in a small town.

I LOVE the Nordic Fest pics. Next year.
What is it with these sad sack parade queens? If they put themselves in the running to be a queen, then they best suck it up, smile, wave and look like they are enjoying themselves even if they just ran grandma down with the riding mower, their panties are crawling up their butts or they are carrying an unplanned child. I agree that you should be named queen of something and show these depressing teenagers how a show is put on.

Queen Surly needs to be overthrown.

I recently came accross your blog and have been reading along. I thought I would leave my first comment. I dont know what to say except that I have enjoyed reading. Nice blog. I will keep visiting this blog very often.

Wish we had made it there! What an ear! What a nephew!