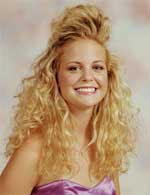 Generally I like people, except out in public.
Why can't people figure out how to move in public places?
At somewhat crowded malls, or sporting venues, there is a flow. A flow moving into a seating area. A flow moving toward the concessions, a flow going up the stairs. And most decent folks understand the "driving on the right" idea works really well with foot traffic too.
But there's always those people who will stop right at the top of the stairs to scope out their next move. Or they'll stop ALL flow to talk to their kids. Please people, as on the highway, move over to the shoulder to take care of business. Or next time I'm going to plow into you full speed and knock your Mt. Dew out of your hand. And everyone behind me will applaud.
And some common folks just need a slap on the head.
At sporting events, like my daughter's volleyball tournament last weekend, there are precious few seats to watch the action. Generally most reasonable adults at these things understand this, and as soon as their darling's game is over, they vacate those places and let the next bunch of trapped parents in. And the exchange goes on. We're all in this together.
Last weekend a group of parents, and their kids, immediately grabbed the entire section, chairs and all, and plopped down all their gear, their coolers, their coats, their blankets, etc. Even though 4 other teams were playing and spectating on the same court. No one else had a chance. Most of us were left standing. At one point I'd had enough, and I moved their gear and gave myself a seat while my daughter played. If I made them mad, GOOD. It was a local team, but I won't say the town's name except that it rhymes with Chutchinson.
And I can talk in a catty way about hair for a minute?
Hey, other Mom's, remember when we were kids in the 60's and 70's and we laughed at all those weird old women still wearing beehive hairdos? Well, you and your bleached poodle perms and mall bangs have become those weird old women that kids laugh at. Your "do" may have been bitchin' in 1983 but it's well past its prime. You're probably a reasonably good looking 40-something woman under all that mess. So honey, get a good cut & color and lay off the tanning.
But could you please get out of my way, and move your tie-edged polar fleece Packers blanket so I can watch my kid play?
Thank you.
Posted by Mnmom

Haha love it! Were you at the Burnsville Warehouse? That
place stinks for spectators!

Now, tell me how you really feel!

I know what you mean about people doing their "thinking" right in the middle of the aisle of a mall or store. Annoying. But my kids tell me that sometimes I'm that person. Probably so. Since I live in an area of summer tourists, I've learned to tell who the tourists are in the grocery store: they are the ones who shop in a family group, making a group decisions, taking up the whole aisle.

As for those who take up all the seats: their mothers never taught them to think of others and they are probably passing that trait on to their sports playing off spring. I think that it is prefectly acceptable to either ask someone in charge to actually be in charge and deal with it, or to say, pointedly, "All the seats are taken, would you mind moving your things so more people can sit."

ps to previous comment: How about standing in front of them and when they complain, say something about how all the seats are taken by their gear, and if they moved it, you would be happy to sit down.

There seems to be a general lack of consideration running over society recently.