My husband the four-year-old 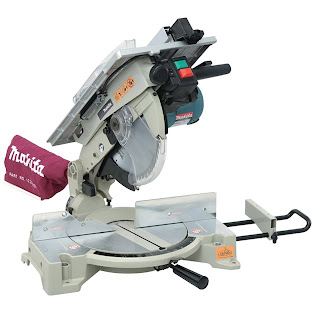 My burly manly muscular husband is the biggest baby on earth when it comes to anything medical. Today he nearly lost his thumb on a chop saw like the one pictured and I had to drag his chicken-Italian butt to the doctor.
He sneaks into the house about 6pm and heads for the bathroom. There I find him rinsing his hands, and his thumb is wrapped in kleenex and duct tape. Then I see the other cuts and blood on his fingers.
"Let me see it!" I demanded. "It's nothing" he answers. I put my foot down, and find a giant ugly gaping slash through the bed of his thumb nail. Obviously a dangerous wound. The wood he was holding had jumped and put his thumb right under the spinning blade.
If you've ever looked at power saw blade edges, you know that the teeth alternate directions, to the left and right. So this thing had ripped a valley through his thumb at 4:30 that afternoon! I took him straight to the doctor. There isn't enough flesh left to stitch together, but they cleaned it out, bound it up, gave him a tetanus shot, told us he'd likely lose the thumbnail, and to watch for infection and come back next week to check the scarring.
He also told Johnny C that bandages were very likely to get caught in power tools, and to stay away from them until the bandages come off next week. Do you think he'll listen??
If I hadn't been home, he would have left the kleenex and duct tape on it! I know because he's done it before. At home I asked if it hurt, and did he want some Motrin? His answer was "No, I took a Vitamin C". I'm telling you - a giant, hairy 4-year old. Who's digits I would rather remain attached.
Posted by Mnmom

Labels: men are babies, my husband

He should have just taped an aspirin to it. It would have done the trick. Really.

Vitamin C??? Oh my! Thankfully you are there for him! I hope he heals quickly!

As much as I like the chop saw, it always makes me a little nervous no matter how careful I am. Glad he's ok!

My husband would be like that if he weren't a doctor. Ha. But when he cut his knee with the chain saw, he knew enough to get medical attention because he knew what an infected joint can be like. And he got chaps to protect his legs. When a patient cut his forehead with a chainsaw, my husband got a helmet. When his hearing already started to go, my husband got ear protectors which he uses even when he cuts the grass.

Oh my! There are several stories like this about my Grandfathers, one a farmer and one a would-be handyman.

Poor Johnny C! I hope it heals clean and well.

And a hearty "Ha!" to Dr. Monkey Von Monkerstein!

Guys never go to the doctor. They're not used to having to go every year like women. I can be like that too, but if it's really bad, I'll go.

It's in our DNA. Not only to refuse to go to the doctor, but to run power tools!

OMG I could hardly read that, I felt so queasy and squeamish, but I tell you what, if it had been me, you would NOT have had to argue with me to get me to a dr. ASAP. Actually I probably would have been unconscious on the floor so it would have been easy.

Be glad that you have him around...if only for blog inspiration. And like Shannon-I almost could not keep reading. Poor Johnny C!

My husband worked for a guy in Iowa City that owned a Christmas tree farm- this was just after we got married. I came home from work one day to find him lighting off firecrackers in the parking lot with a heavily bandaged wrist. Turns out he had hit his wrist with the machete and his boss took him to the hospital for stitches and then sent him home with a great big bag of fireworks. Some workman's comp, eh?

That's not crazy, that's manly. It's just you women with your word games that makes it seem odd.

If you hadn't been home, he'd be suffering from all sorts of infection! Girl men HATE going to the doctor. They can be damn near dead and think a Tylenol will fix it. Glad you put your foot down!