Another crack at the radio 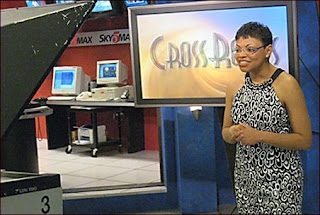 I had another chance on the radio today!!! I'm hooked - why didn't I find this in college instead of going into Social Work of all things. My blogging pal Sheletta Brundidge, above, got me another spot on The Kevyn Burger Show on 107.1 FM here in the Twin Cities. You can listen to the show at the site. Sheletta is about 115% cuter in person if you can imagine that, and she's so funny she makes my eyes water sometimes.

Above is Kevyn - a totally interesting woman who has been in the broadcast industry for many years, and also a fellow breast cancer survivor. She just had me pop up in the chair, put on the headphones, and away we went! Today we were laughing about 1. people assuming you are your kids' grandmother and 2. people asking when you're due when you aren't pregnant.

I'm such a small town Iowa girl. I'm the the lobby of KSTP studios - a local ABC affiliate - and you'd think I was in Oprah's green room. I'm trying to play it cool but I'm just waiting for some celebrity to walk by so I can tell my friends all about it. "Vineeta Sawkar walked by me and said HI! and I said HI!". Such a dork. I probably would have spit while I said something and they'd have to call security to get the drooling idiot out of the lobby.
Posted by Mnmom

Labels: radio rocks, the glory of me

what time were you on?

What a celebrity you are!

I go to the State Fair to celebrity watch...now that is geeky!

They let you talk a lot this time. You're movin' on up. Great stuff today. I loved your "Fatal Attraction" comment!

When are you getting your own show??? Surely they (the powers that be) know your talents are to great to let walk away!!! Enjoy yourself.

that's so cute. I'm glad you are letting your voice be heard.

Congrats! I missed it! I'd be as star-struck as you.