Another sweet weekend in the Land of Sky Blue Waters. Had Pink Cupcake's 10-year birthday party and for a party-on-the-cheap we had a blast. Took 6 squirrel-y 10 year olds to Hyland Lake Park in Bloomington, MN. This place is ENORMOUS and has the world's biggest play structure I swear. Big enough to keep all six of them climbing and running for four straight hours.

Then off to the picnic area where we found a deck of tables overlooking Hyland Lake. After grilling hot dogs and singing Happy Birthday, they played in and around the lake for another two hours. Not quite warm enough here to actually get IN but that didn't stop them from poking everything with sticks and wading around in the sandy waters. 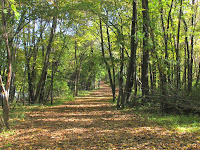 Yesterday we worked a bit more on the garden, laying down mulched paths between the raised beds and marking out the rabbit fence. Took two girls to Target and Twin #1 got some much-needed spring clothes while Pink Cupcake spent two of her birthday Target gift cards. Here's a hint - kids LOVE gift cards! Then she and I went to DQ where she bought us both a treat with her DQ gift card from the amazing MG.
Posted by Mnmom

We did a birthday party there... awile back..before the new playground...but back then it had the biggest slides etc! I think that place is the best kept secret! When was the actually birthday? We have May 1, 2 and 3 in our family! Happy Birthday to your 10 yr old!

I'll take a soft serve cone dipped in chocolate next time you go to DQ please.

That looks like a fabulous park. I'm all about parties on the cheap. The girls have summer birthdays, the best?.....the party at the beach....complete with hula hoop contests and sand castle building........such fun and nearly free!
Happy birthday to your baby!

Ooh, that does sound perfect! All of it! I was Target yesterday too, too bad I missed you!

Kids and water, aren't those the basic ingredients for fun?

Now see, you done got me going. I was just thinking "What are we going to do for my Andrew's birthday?" We can't spend a lot of money and this is perfect!

How sweet that you were treated at DQ. There is nothing wrong with a birthday event such as that. I think you did wonderfully.

That sounds like a lovely party, MNMom. I'm glad the weather cooperated and you got to celebrate. Happy birthday to your sweetie!

What a great day and it looks like a perfect spot. And then the DQ - yum!

Happiness and joy to you all!!!

What a great weekend. I could use one like that. Maybe this Sunday since it's Mother's Day, I can get the girls to go out hiking around with me.

We love Chutes and Ladders park! Maybe we'll meet up there sometime. Last time we brought the dog to go hiking on the trails but Husband and Kids never got off the play structure and poor Lucky and I sat patiently waiting...the hike never happened. Husband thinks it's more fun to see how far he can fly off the end of the metal slide.

Oh there are her plans!! Happy birthday indeed!