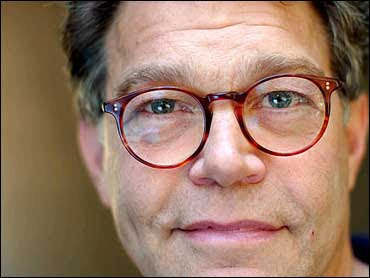 From local news : Al Franken's main competition for the Democratic nomination for U.S. Senate dropped out Monday, giving the comedian-turned-candidate a major boost. Franken and lawyer Mike Ciresi were vying for the party's endorsement to take on Republican Sen. Norm Coleman in November. Coleman is seeking a second term. Franken has raised millions more in campaign funds and lined up most of the important union endorsements, but Ciresi's impressive resume as a trial attorney and personal wealth positioned him as a potential spoiler to Franken's ambition. Ciresi's statement that he was dropping out indicated he didn't think he could catch up to Franken's lead in rounding up the support of Democratic delegates, who will confer their endorsement at the state party convention in June. Both Franken and Ciresi vowed not to run in the primary election without the party endorsement.

You know what this means - VOTE FOR AL!!!!!
Posted by Mnmom

Al's main competition did not drop from the race. Mike Ciresi was in third place. Al's main competition is Jack Nelson-Pallmeyer. He's doing better than Mike in the delegate count, and he's done so with a later start into the race, virtually no media attention and much less money.
Hmmmm...must have something amazing going to do all that. I call it a fantastic candidate with a fantastic grasp of the issues that just grabs people. Catch the wave! Check him out at jackforsenate.org