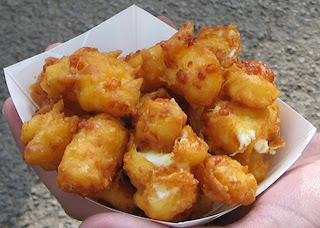 The first step is admitting you are powerless.

I am completely and utterly powerless over fried cheese curds.

It's Defeat of Jesse James Days here, and there is a cheese curd booth right downtown, and it's calling to me like a siren on the cliff.  Even as I type this at midnight in my pj's I'm tempted to jump in the car.  The salty taste, the crunch, the creamy middle, the OH MY GOD MAKE IT STOP!!!


This morning pink cupcake and I went the the craft show, or as Johnny C calls it the crap show.  Lord have mercy I have never seen so much crap in one place.  Even the booths smelled like a dank smoker's house who fries too much hamburger.  And what's with everybody and their dog selling sheet sets at these things!  They even show up at the Home and Builders show.   They just spring up in some stealth marketing ploy.  One of these days I"m going to go out on my deck and find a retired guy there selling cotton sheet sets.

We made the major mistake of stopping and actually playing with some fun toy bows and arrows.  Then the seller pulled me aside and launched into a crazed story about another guy in the area selling the same thing, and how he conned this guy out of his idea.  Creeped me completely out.

But the very minute we were done there, we headed straight for the cheese curds downtown.  You see what I did, don't you?  Took my youngest, hit the craft show first, all in a ruse to cover my true reason for leaving the house.  The good news is she won $10 in Firemen's Bingo.  Being a reasonably good mother I fought the urge to rip the bills from her hand and buy more cheese curds.

My "good" friends can avoid those things.  They can meander through the booths and maybe get a green salad from the Greek booth, or some unbuttered popcorn from the wagon.  And if they are feeling really bad they'll wash it down with a Diet Coke, but you can't drink too many of those because the sodium makes you retain water weight.  Meanwhile I'm hiding behind the porta-potties scarfing down my 3rd cheese curd order of the day while the warm oil drips down my chin and my face glows with orgasmic delight.

"Who? Me? Oh no, I don't really ENJOY the food!  No I just came downtown to be out in the fresh air enjoying a community festival.  What?  Why am I eating cheese curds?  Oh THESE?  Well, cupcake demanded we order some, then she decided against them and I just can't throw away food, so I started eating one.  Oh my now I'm so full I won't be able to walk home!  I just hate all this greasy food.  Why doesn't someone open a carrot and broccoli booth?  I could eat that stuff all day. Burp!  Oh now I'll have to do an extra 45 minutes on the stair master!"

Good thing this event happens only once a year.
Posted by Mnmom

They look like Tater Tots, taste like cheese, and have power over the human mind? We're all doomed.

You are hilarious. What am I supposed to do about this guy on my deck with the sheet sets?

Powerless huh, well I can understand. Love cheese myself and I'm trying to give it up.

Okay, go to your local library and get the DVD Food, Inc. and watch that. See how those poor cows are treated and what really is in that milk which is the main ingredient of cheese and maybe that will help you. Probably not, but hey, it's worth a try.

Listen, do not listen to the nay sayers. Do not feel bad about the 3 order addiction, it's one day. I can't say no to meat or cheese products, and honestly guess what, while I would hope my food is obtained semi humanely, I believe those animals were raised for food.........
I hope one day to visit MN and experience fried cheese curds!
Loved the story.

If they had bacon in them, they could take over the world!

Hee hee hee hee! You crack me up!

There was a health expert on during the fair - forget which channel - and they poo poo'd the "its only once a year" thing. I wanted to throttle them!!! If you cannot enjoy deliciousness that is cheese curds - you cannot LIVE!

I'm generally not a fan of cheese curds (they squeak) but if you deep fat fried them, I'm sure I'd fall in love...

I. like you, am powerless. I hate the fair but would gladly go if they created a "cheese-curds only" entrance fee- I can't justify paying that much just to get cheese curds.

Do you remember the giant plateful of deep fried heaven the Cafe Deluxe provided? I worked there for a time and I admit that my free "meal" would often be that.

I've never had the opportunity to eat fried cheese curds but have no doubt I would adore them. This from someone who ate fried haggis balls at the Scottish Fair two weekends ago...

Fry anything and it is wonderful! Oh, and I ate a fried Oreo too. Sigh.