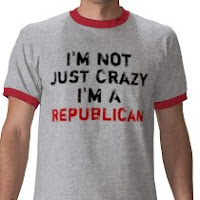 "While Senator Specter's decision was indeed disappointing, it did allow us to realize -- perhaps sooner than we would have liked -- the dangerous ramifications of unbridled, one-party rule in Washington," National Republican Senatorial Committee chair John Cornyn said in a post on the conservative website, Powerline. "But we utterly fail to see that this is a clear rejection of far-right philosophies, or how dangerous WE have been for the last 8 years, so we'll just keep banging our empty neocon heads on the proverbial brick wall. Oh, and, did you know the Democrats or the Pittsburgh Steelers Superbowl wins in 1976 and 2009 are to blame for the swine flu?"

Some of the top-ranking GOP officials in the party have viewed the loss of Specter as the earliest signs of an anti-Democratic backlash. And GOP think tanks have affirmed that bacon is not fattening, the moon is made of green cheese, and Elvis is living in Mason City, Iowa.

"There is no more visible evidence that the American people are already rebelling than Arlen Specter becoming a Democrat," said Sen. Jim Inhofe (R-Okla.). while wearing a tin-foil hat and handing out pamphlets about the mind-control dangers of digital broadcast TV.

"Oh, that's quite the opposite," Sen Jim DeMint, said, when asked by CNN's Rick Sanchez if the party was shrinking. "We're seeing across the country right now that the biggest tent of all is the tent of freedom. And what we need to do as Republicans is convince Americans that freedom can work in all areas of their life, for every American, whether it's education, or health care, or creating jobs." Sanchez replied, "What -- what -- what the hell does that mean?" "Is Michelle Bachmann talking into your ear piece? How much crack do you smoke, anyway?"

Later, the South Carolina Republican added that the GOP wasn't growing smaller, it was just moving south, as in to Hell, in a handbasket.
Posted by Mnmom

OMG - my side hurts from laughing. EXCEPT: for blaming my Steelers for the swine flu...tsk,tsk!!! and yes, Michelle Bachmann WAS talking into his earpiece.

you got that right!

So funny. Can we choose the Republicans we want to jump ship, because I don't think Arlen would be on the top of anyone's list

Heh. Your commentary was perfect!

At this rate, the Republican Party will end up having to change its name to the People's Front of Dumbassistan, and hold their next convention in the back room at Shoney's.

I was watching the Sanchez/Demint interview on CNN and loved how Sanchez, mouth literally agape, asked his question. I'm working on a post about how similar the current Republican party is to the extreme left at the end of the sixties.