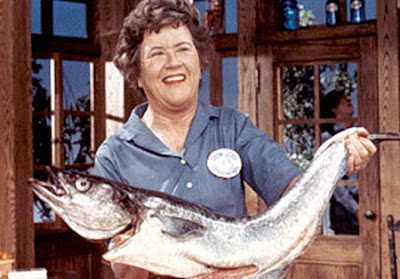 Turns out my favorite chef Julia Child was indeed a spy for the OSS during WWII!

I've always admired and enjoyed Julia Child. What a fantastic woman!! During her life, she always claimed that she was merely a secretary for the OSS during WWII. But didn't you just know with all that intelligence and character she had to be MORE??!!

And now our National Archives has released a long list of names of military and civilian operatives. "Other notables identified in the files include John Hemingway, son of author Ernest Hemingway; Quentin and Kermit Roosevelt, sons of President Theodore Roosevelt, and Miles Copeland, father of Stewart Copeland, drummer for the band The Police."

We'll never know her full story - she took that to the grave. Now my respect for her has grown 1000%. Wow, just plain wow.
Posted by Mnmom

Amazing. I bet she snuck cameras in her soufflés and everything.

She had to learn that French cooking somewhere - where better than a French restaurant during the war, eavesdropping on the German officers?

I love this story!