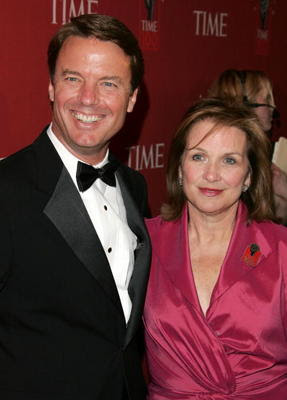 Remember how I said I was behind John Edwards? Well not so much anymore. Seems this creep can't keep it in his pants while his wife battles breast cancer. What part of his wedding vows did he misunderstand? Usually I really don't care what politicians do in their private lives, but I really looked up to this guy and he spat all over my good regard.

Granted, his wife has known about the long-gone affair since 2006, has moved on, and is not wishing to hash it out in public. That is one classy woman. But my respect for HIM is now in the crapper.

Had a long talk with my brother about men and infidelity. He thinks some men do this merely because they can. What do you all think? Can any man or woman with that kind of celebrity, charisma, and large numbers of willing partners avoid being unfaithful?

I'd like to think morals can withstand the pressure.
Posted by Mnmom

I think the fact that he was a politician is more important here than the fact that he is a man. (A bad man, but still.) As Bill Clinton showed (and as Edwards himself said in his statement on this dalliance), there's something about the megalomania of the politician that encourages this kind of destructive behavior.

I'm just waiting for the post-2008 revelations about about The Decider's playboyism in the White House. You know it's happening.

well, i have a slightly different take on things. my sister had breast cancer, and i read a lot about it. for one thing, men in general have a hard time coping with that disease, in particular; there's a very high rate of divorce among couples where the woman has breast cancer.

i am not excusing his weakness. i am not saying his infidelity is OK.

what i'm saying is, that marriage had unfathomable pressures on it. i do not judge him. i feel bad for her, but i am not condemning him. that's just too easy of a response.

Thanks, Laurie, like MNMom, I struggle with this revelation in the light of my appreciation of Edward's rhetoric. Your insight into the personal pressures, coupled with Christopher's insight into the politician's megalomania does help contextualize the behavior. (Behavior that I don't condone either.)

I was going to say something along those lines but he says it better, so that is it from me.

This is by no means an endorsement. It is more of a sad statement. Sex in that realm is more about power and narcissism. The cancer is actually a sad aside if you ask me.

Insightful posts. Of course I'd like to have a hero that really deserved my undying adoration, but unfortunately, the world is not made that way. People mess up; it's that darn "human" thing. Is infidelity a good thing? Of course not. But I fear our system of democracy has set us up to be disappointed over and over again and in some ways, weed out those that may be most able to lead. How many school class presidents have you known that were regarded as "cool" but were ass-holes for the most part?

Some times, the pressures of life make us our "best" person, and some times, pressure brings out the devil in each of us.

All I can recommend is to pray for them all, men, women, people with diseases, healthy people, even Republicans-- who all are none-the-less human. God knows **I** need all the prayers I can get!

Mnmom... I have a little something for you at my blog, stop by when you can!

I DO judge him. Some things are never okay or excusable. Just...be a good person, you know?! Can't anyone manage that anymore? Sad. Sigh...

Interesting comments. Infidelity is wrong and hugely hurtful. Full stop. But of course the hinterland of the unhappy marriage is usually a complex story with two sides.

In the UK, what upsets the public if politicians (or royals) behave this way is when it's felt that they've been parading their happy family photo opportunities and it's all a sham.

I voted for him in the primary and don't regret that vote. He represented the things that are important to me better than any of the others.

I do know that this happened when his wife was healthy. Doesn't make it any better that it happened, but it didn't happen while she was sick. She was in remission when it happened.

I imagine that as a cancer survivor, you have a unique perspective on it. As someone who made mistakes in a previous marriage, I also do. To this day, I reflect a lot on why it happened-- for me it came down to insecurity, anger and pain from my past, and not dealing with it well-- to have the need to feel attractive. It wasn't until I felt better about myself that I understood it all. In my case, taking a two year break from relationships after a second marital failure was a key to it all.

Mr. Edwards has done the same-- a lot of self-reflection and realizing that he was bullshitting himself, and I respect that. I also respect that he and his wife are still together. I also think that they had the right to deal with the issue in private. I've also been on the receiving end of infidelity in a relationship and know how painful it is. To have it trotted out in public must be horrific for both of them.