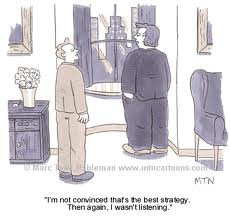 Yesterday afternoon I asked Slim to set out the trash cans for collection. He replied, "Oh, I'll get them after dinner." Did he act on that? Of course not, which is why, when I woke him up at six this morning to go set out the trash cans it was an extra special kind of sweet revenge. The cherry on the top of that sundae was when I told him, "If I hadn't asked you to do it, and if you hadn't told me you would do it, I would have set out the trash myself. Sucka!"

What do you want to bet he doesn't forget again?

I have learned to embrace the fact that my kids will scatter faster than phlegm in a bathtub when I ask for help- whenever they are driving me crazy (which is quite often) I just say, "I need some help with..." and then enjoy the peace and quiet. It is my own "calgon" moment.

Help would be better but silence is golden.

I bet your family would listen to you if you prefaced all comments with "M/J/L, I'd like to give you $20"

I quite listening to NPR a while back and I have to say I am a lot more happier.