Then what CAN we do? 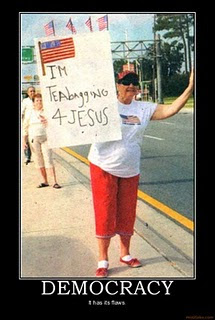 OK, ok, so we won't give any parts of the US to the teabaggers, then wall then in and make them live in their own stink. But what CAN we do with them?? Seriously folks I just can't live with people who threaten my life based on some lie they heard on FOX. I can't share my living space with people who don't read and don't listen, and who shout down the opposition and think they've "won".
Kirby has a good idea - copied from her blog:
Here's an idea, why don't we start using the provisions of the Patriot Act to round up and prosecute the Tea Baggers for all their violent fucknuttery. Then, when they start crying like the bunch of pussies that they are about how unfair and unconstitutional the Patriot Act is if it's used to put white people in jail, we dismantle the whole thing. Knuckle draggers gone, constitution restored, everyone's happy.
What do you think???
Posted by Mnmom

Just have the media stop covering them.

Kirby always has great ideas. My ideas are mostly illegal...

I'm so tired of the Teabaggers!! Remember when we complained @ GWB, we were un-American. Now you only love America if you want to reclaim in and bash our current admin. Good gravy I'm so sick of it!!

they certainly are hypocrites but I doubt if they could ever see it. the patriot act if for those brown, or black, or different peoples, not them and no amount of talking to them will change their mind.

I don't think the tea partiers are violent. But I can understand why you don't like what they stand for.

I think that the Tea Party nonsense will be a memory by late summer, or winter at the earliest. We've already seen a huge diminution of their fury after the evil, socialist health care bill passed, and I expect that it'll only diminish further as the GOP clamps down on the nuts in the run-up to the November election, in which they won't win many seats by running from the right. (Some, but not many.) We don't have to violate their Constitutional rights to get them to go away - we just have to ignore them, or better yet, laugh at them and their incredible stupidity.

HEY! We are talking about starting a MN Blogger get-together.