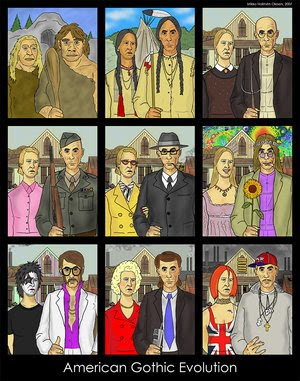 I see this giant gulf between Right America and Left America growing wider every day. But is it the truth, or just the result of a blood thirsty media fanning the flames and seeking ever more outlandish sound bytes and headlines? You'd swear there are no reasonable people left in the United States.
However I see exceptions every day, and our media pretends these people don't exist.
Starting with me, there are millions of card-carrying feminists who really love their husbands, enjoy their kids, happily stay home (or stayed home for a while), and bake tons of cookies. We have pretty conservative lifestyles and much of our days are split along traditional sex roles. We aren't forced here, we WANT to be here. I love my Suzy Homemaker tendencies, but would fight to the death over another woman's right to chose a thousand different lifestyles.
There are millions of Americans who could never imagine choosing an abortion, but would never take that right away from anyone else. They don't WANT to invade someone's privacy! They don't WANT the Government to make those decisions.
Americans exist who consider themselves Christian, but you won't hear it from their lips. Instead they display their love for their fellow man by volunteering. They pray in private as the scriptures dictate. They don't feel the need to parade their religion around like an Olympic medal.
A great deal of folks want every one's health care covered, but are worried how we'll pay for it. They have reasonable questions, but can't be heard over the shouting.
There are a lot of solid military types who think we have no business in Iraq.
Most immigrants are working hard, sometimes two or three nasty jobs, and learning English.
A lot of registered Republicans are disgusted with Bush's deficit, and humiliated by the name-calling and buffoonery coming out of their party leaders.
Plenty of Americans live simple lives and are happy with a good laugh, time with friends & family, and a nice meal.
Everyday, in public schools across the nation, kids are safe and well educated.
Not one adult gives a rat's ass about Tiger Woods.
But none of these folks will make the Evening News.
What are your thoughts?
Posted by Mnmom

The media loves to cover the fringes ans claim it's the mainstream. Many Republicans want health care just as many Democrats are Christian and progressive. The media refuses to cover anything but the narrative they have so carefully constructed.

I agree with all these things. Maybe I could make the news by killing someone. Any suggestions or requests?

This is a beautifully written and well put post. You have said some really important things.

As you know, I like to use my Facebook page as a bit of a salon by posting provocative things and encouraging discussion. For the most part it works, people get passionate but it mostly stays civil.

None of which makes good news copy as far as the media goes.

Most people just want to live. If we want to live in harmony at large, everybody has to surrender some things in order to gain other things... that is the good and bad news of the common good.

Thanks for this thoughtful post. You are an amazing woman, how grateful I am to know you.

Okay...did you look into my mind when you wrote this..thank you very much! I am so tired of the media and their portrayal of what they think I am thinking...I rarely watch anymore...

You are so so right, I am so torn tired of hearing how no one in Washington can get along. There are people so busy bashing Dems and our President that they can't see straight. Is it so wrong to want better healthcare for everyone?
Don't get me started on Tiger Woods..........makes me want to puke, who really cares??

So well put. Thank you.

Perfect. I linked it from my blog. Couldn't have said it better.

Well said, this is spot-on!

Exactly. I stayed home with my girls during the day when they were younger worked at night when they were asleep and loved every minute of it. It had a lot more to do with my homebody temperament than being or not being a feminist.

It is truly amazing how television news and "reality" television do not show the world the real people of America.

You said it, Mnmom!!! Wow. So good. This should be published somewhere. Will you please send it in as a letter to the editor of our town's newspaper?

and to the paper down here! And to the DesMoines Register and Star Tribune, and who ever else might print it?! This is good.

Much of the mass media is simply a hyped up, completely expendable, reactionary distraction from all that is unique and genuine about our culture and humanity in general. But I do love my NPR.
Pamela