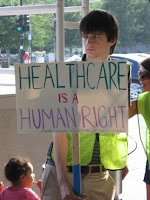 Here's what I'm sick of:
Folks talking about the expense of universal health care as a reason to dump it. Hey GOP - our current system is vastly more expensive and we all know who's reaping the benefits of that. We aren't as dumb as you'd like to believe. And your stupid war has been vastly more expensive, and for what? Broken bodies, broken homes, dead children.

These blocking conservatives are talking about health care like it's a plan to put every American into a beach home and a Lincoln Continental, regardless of their income. Quality medical care is a RIGHT you people!

And how expensive is it for so many Americans to be missing work and joining the disabled merely because they couldn't get quality care? Imagine the work force we'd have for all kinds of businesses of no one had to worry about health care benefits.

Lately I've been seeing a lot of nonsense in right-wing essays about how anyone in America can get care, even if they don't have insurance. How much crack do these folks smoke anyway? What alternate universe do they live in? Do they even BOTHER to visit the real world now and then? Sure, they'll stabilize the uninsured in an ER, but the patient will still get a bill, still won't be able to pay for any prescription they leave with, and still won't get any kind of constant care to keep them out of the ER in the first place. Do they truly think a diabetic is better off without ongoing care, and only seeing an MD when it's critical in an emergency room?

Frankly, I'm all for a single-payer plan. Government shouldn't be running the docs, just paying for their services.

And don't believe the scare tactics about the Canadian system. We have lots of relatives in Canada, and they just gush about their care. They've experienced colon cancer, Parkinson's, difficult births, etc and they got top-notch care just as quickly as we would here. That argument that Canadians are forced to go to America for surgeries? Yes, some Canadians choose an American hospital for a variety of reasons, but the Canadian system STILL PAYS FOR IT!
Posted by Mnmom

Labels: Health care is a Right, I hate neocons

I know. Its' ridiculous. Why wouldn't people want everyone to have access to decent health care? Maybe if some conservatives would step out of one of their seven houses, they could get a better view of how the rest of us live.

The former Minister of Health from Canada was on CNN on Monday. He is now a parliamentarian. He had statistics to knock your socks off - all in favor of the Canadian health plan. Like he stated - it is financed through taxes - an additional tax withheld from pay. If people were smart - this figure is still far less than the average monthly health premium.

Lynn Cheney was on larry King last night spouting her evil GOP mantra - of people not being able to choose their doctors, dying because they had cancer and doctors wouldn't see them, blah, blah!

Like you, I have consulted some Canadian friends and hear none of this. Cheney also said the government would be deciding whether or not procedures would be granted - excuse me....and what do these CEO's and fat cats of the HMO's do now?

ARGHHHHH!! These people make me mad.

It is really amazing, isn't it? It's like our elected representatives don't work for us, they work for the insurance companies.

Great points.
Don't let anyone say how great the VA medical system is in this country either. They do take care of people for less money (single payor) but they also severely limit what they do without really saying so.

I know. I have an "inside" track on this.

Or ask my Brother in Law who went to the local VA clinic for his pneumonia. They wouldn't even look at him; they sent him to the emergency room, which billed him $900, which the VA refused to pay. That's how they save money.

They know damn good and well that they WON'T make as much money off of us if we have single payer and that is why they fight it tooth and nail. Fuckers! This shit just makes me so mad!!!

How many members of congress have voluntarily given up their health insurance until all Americans are covered by a public option? Any guesses? One guy did it to make a point, and he's a Democrat.