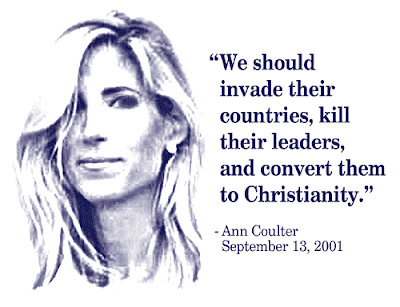 Do you really think the ultra-right wing of the GOP is declining in power? I'm not so sure. Seems to me there are a lot of very fearful folks who cling to that model, and with the economy in free-fall I'm afraid we'll see more.

Some people just love to have hard driven leaders who speak only in terms of black vs white, us vs them, right vs wrong. They want absolutes. The idea of issues being vague or complicated or arbitrary or random is just horribly frightening to many of our fellow Americans. They want their principles wrapped up in neat little packages tied with a bow.

It's so much easier to accept Marsha and Stan as the couple next door instead of Steve and Rick, or Janice and Evelyn. Marsha and Stan they've seen before, even if Stan beats Marsha or sleeps with Marjory down the street. The fact that Steve & Rick (or Janice and Evelyn) are just as committed and do quite normal things like mow the lawn, go to work, and tip the mailman at Christmas is just too much for their minds. If they open them to those couples, then what's next? Admitting that being gay is not so bad? Admitting that straight marriage is loaded with problems too? Admitting that that gay marriage isn't the end of western civilization?

Why should they study world history and global politics? It's just quicker to think of the enemy of the day as an animal. If they have to look at them as people just trying to make a living and raise their kids, then they'd have to admit that war is not such a great idea. They'd have to grapple with the killing of mommies and babies. They'd have to recognize the humanity of people with dark skin. They'd have to integrate the sins AND the triumphs of the USA and to have a more balanced view of our role.

If we just cut welfare to everyone, then all Americans will go get jobs and quit feeding off the taxpayer, right? It's so much calmer to think all folks receiving any assistance are just lazy. It's too much to admit that some families have two or three full-time workers who still can't cover all their food and medical expenses. It's too hard to admit that most American families are one medical crisis away from bankruptcy . . . one job loss away from homelessness . . . . one death away from poverty . . . one mental illness away from full-time work.

Fear is a strong motivator, and I don't think it's leaving anytime soon.
Posted by Mnmom

Fear is toxic and a motivator as such. It makes me sick to see it used in this way, but that is the story of the world.

God I hate it when I sound so cynical!

I agree, sadly. Some people just can't seem to get around their fear of anything different from the way they are.

The fear spread by some of these idiots is almost contagious at times. The weak minded or easily influenced - fall for every word, hook, line and sinker. Heaven forbid - these folks would learn to think for themselves.

That fear can be so dangerous when it inspires hate. And don't get me started on Ann Coulter. She's heinous.

Yes, I agree with Mommy Lisa. Very well said. I just spent a long weekend with the right leaning. Their logic or lack thereof blows the mind.

Very well put, I agree. This fear mongering is nothing new; the target of the fear is all that changes from generation to generation.