I miss my folks 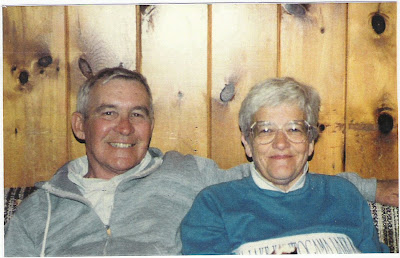 Earlier this year I told you about my Mom. This week, Little Sister wrote a great post about her last Christmas with our parents. Last month was my Dad's birthday. Thought I'd tell you just a bit about him.

Dad died of a heart attack in 1999 just nine months after my Mom's sudden death. We think he died of a broken heart.

He was born Thomas Arthur Jenkins in Chariton, Iowa in 1929. He descended from hard laboring Welsh and Swedish immigrants. According to family stories, my Dad was the original little rascal and in fact bore a striking childhood resemblance to Spanky McFarland. My Dad as an adult looked like the perfect mix of Captain James T. Kirk and Sergeant Carter. Feisty? You betcha! 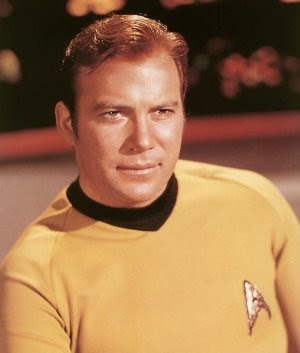 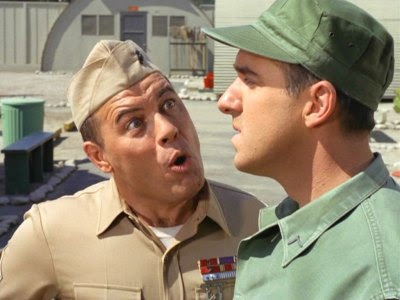 Dad's nickname in High School was runt - he probably topped out at 5'5" - but he played a mean game of baseball and football. After High School, and some serious wandering including a stint in a logging camp in Oregon, he ended up in the Air Force. With the wonderful GI Bill, he was able to attend Iowa State and dive head long into Civil Engineering. He spent his entire working life as a Construction Engineer with the Iowa DOT. He once told me there wasn't even one cold dark winter morning that he didn't look forward to going to work. He was one of those lucky bastards who just loved what he did for a living.

My Dad was a feminist before his time. While he would spout knee-jerk reactionary statements, he made sure each of his three daughters knew how to change a tire, run power tools, work with wood, scale a fish, rig up a fishing line, shoot guns, and build a campfire. He loved having kids, and when he came home each day, he was truly home. He was often roped into quite unmanly activities like dressing Barbies and watching thousands of majorette routines. Luckily he also had a son to keep his masculine pursuits from disappearing altogether.

Dad could be hell sometimes, with that Welsh temper. But he was usually a lot of fun. He could sing like the dickens - again the Welsh genes - and play harmonica. His laugh was entirely infectious. He appreciated the little things, and for such a man's man he just loved doilies, candles, and cloth napkins. He drank coffee like his life depended on it, and by about 1971 that was probably true.

In the late 1960's my parents bought a three acre section of a run-down farm, tore down the sagging barn, and built the greatest home place. He made a swing out of an old basketball and a burlap bag, threw it over a dangerously high tree limb, and created a heart stopping ride out over a ravine. He built us a playhouse on a deck overlooking that same ravine.

While tearing down the barn, Dad inhaled plenty of microscopic dried bird droppings hovering in the air. This was before face masks were commonly used. Soon after, he became so sick he was hospitalized but Docs were stumped. Years later we learned the culprit - histoplasmosis - a bacteria found in avian fecal matter. Usually the scarring of this infection causes no harm, but in Dad's case it grew right across his center of vision. He basically lost his sight in his late 40's. After that came the loss of his driver's license, his ability to hunt, work with wood, read, or to see anyone's face with clarity. He handled this loss with dignity, and with magnifying glass in hand forced himself to learn the computer and all the Internet had to offer. He dove into Genealogy to fill the holes where his hobbies used to be.

I miss hearing him say "atta girl!" or telling my kids to "come over here and give me a big bear hug". I miss making him coffee. I miss setting a pretty table with my cloth napkins and having him gush all over it. I miss the smell of his Old Spice aftershave. I miss telling him a good joke. He's been gone almost ten years, and I still can't delete his email address. I regret that I didn't apologize to him, and Mom, for being such a mouthy ungrateful kid.

We miss you Grandpa Tom! Hope there's coffee in Heaven!
Posted by Mnmom

MNmom, thanks for this look into your dad, and your family. I know it's hard and the holidays make us miss family more.
You write so beautifully, your dad would be so proud of you.

What a beautiful homily to your Dad. This time of year is tough, no matter how long they have been gone from our lives. My Dad would be 102 years old today, and he has been gone 29 years (on the 15th) of this month. The "infectious" laugh and sense of humor I miss the most.

My dad is in heaven too..he died when I was 16...I miss him every single day! Here's to Old Spice and Coffee!

Oh that was so lovely! Such wonderful and stirring details n your memories!

You have received some wonderful gifts from your parents, your sisters have too!

I lie awake at night sometimes worrying about and dreading the time when my parents die. Even the time when they become aged and need care. It's so hard to think about!

Now I'm crying more too. Why is it that we miss them so much more this year? I think it is because for the first time since they died, none of the three of us will see each other over the holidays. They were great parents! Miss you and have a great time with JC's family out east!

Okay, I am crying now as well. Maybe we all just needed a trip to the wailing wall. My house looks beautiful-but I am lonely for my family and friends-no one around to see it. MISS YOU!

What a fantastic guy. Any guy who'll make sure there is fish scaling and tire changing in a child's repertory, deserves his own pot of coffee in Heaven. And your Mom sounds fantastic. No wonder they created great, smart kids.

Thanks for this MnMom! This is a wonderful gift! LittleSister's too!

Wow. What a freak thing to happen to your dad's eyes.

If your dad was mostly blind, I never knew it. I really liked your folks. Fabulous people all around for so many reasons- not the least of which is the four amazing kids they raised.
And, yes, there better be coffee in heaven or my folks might need to pack up and move on to somewhere else.

I am really behind in my reading and just saw this.

It is so beautiful- what a story, your dad really came alive for me.

Now I have to go read your sister's post.

You are brilliant Mnmom, I think I can hear your dad from wherever he is (me I am a big fan of heaven and a believer that we can all go and get in, especially if we are funny, broke and/or blog) saying "atta girl" to you.

Mom, I would love him too. Reminds me of my dad. I get to go up and see both of my folks on New Years; but I always worry it will be the last he is 81 and in good health; she is 79 in really crappy health. Treasured memories; and you will love them forever.

Thanks for the great read.