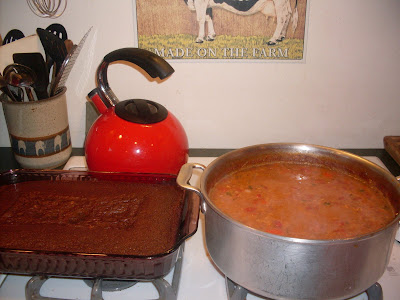 Supper at our house has become "we're broke and you'll just eat what I give you". Kind of like the meals I had growing up, which never hurt anyone. Well, except maybe that liver-n-onions incident but we won't go there.

Before the job loss, I would grocery shop without much thought. We weren't buying filet mignon and caviar mind you. But I planned menus based on what was going on that week, what did I feel like making, what sounded good, what were the kids craving, etc. Sure we used coupons, I'm not an idiot, but not much consideration beyond that.

Now? Well we haven't bought deli meat since August 2007. We only buy regular meat if we have a BOGO coupon. We now eat lots of potatoes, pasta, and beans. And I just found out there's an ALDI about 20 miles away, so we'll be making a pilgrimage soon. Let's say I'm getting a really, really good lesson in frugality. My Grandpa Ginny always said "you pay for your education one way or another".

Yesterday I made this big pot of bean soup with stew meat - it was absolutely delicious! And beside it is my homemade chocolate cake. I'll share recipes with anyone who leaves a request in the comments.
Posted by Mnmom

Well...today we had pancakes and bacon... no one complained..well a couple eye rolls! But oh well...I would love your bean soup recipe..Hey can you send me the Mafia game directions???

The soup sounds good! I've got a couple of meatless recipes I keep in my rotation, and while my kids and hubby are meat eaters at heart, they manage. I also make home made cornbread with soups, it's cheap to make.
I'd love the recipe.

Beth - send your email to clgo@charter.net

MG - you've already been so good to us. I can't steal your pork!

You amaze me. Thank you for being your twinkly bright self despite the darkness. I love that about you, it is a great thing.

Please send me those recipes!

I want the soup recipe!

You are a very positive person- your family is lucky to have you. I hope Obama brings a mortgage present to you in January.

That soup looks awesome! I would love the cake recipe, but really, I shouldn't make cake, ever, not unsupervised!

Long ago, another generation of mothers learned how to "stretch a buck." We have definitely spoiled our families over the years, during the good times. I can't get my daughter to understand that "things are quite different now" and we tighten the belt and s-t-r-e-t-c-h every single dollar. Dinner looks delicious.

Yep, it's true--now some of us finding ourselves basing meals around cheap, filling ingredients like potatoes and beans rather then expensive meat and dairy. It's kind of head-spinning, but I can relate. We are very blessed to not be dealing with job loss, but a tight budget has forced me to get creative with meal planning. I now also make more things from scratch than ever before, like pizza dough. Anyway, I love bean soup on a winter night. Good for you. Also, you know I think you are AMAZING to be such a positive, fun, warm, and lovely person during such hard times. You benefit so many people with your sparkly personality.

That looks delicious. Frugality is a challenge, but you're handling it with grace and humor. You know, cutting out a lot of processed foods has been good for us. We're eating so much more home-cooked foods and the kids are wiping it out in ways they didn't before when they had more access to fast food and junk.

I hope something good happens for you soon!

Girl hell, that looks like a good assed meal to me!! Made me hungry and I just ate lunch! Cake and soup? Now girlfriend, that's what you live for!

My 2 year old will NOT eat steak; but home made soup that costs $4 to make, he'll swallow a bowl or two whole!!!