My career as a politco stalker

I seem to be growing into my career in politco stalking. I've had my pic taken with John & Elizabeth Edwards, and Al Franken. Monday night I almost added Arianna Huffington of The Huffington Post to the list. She spoke at a local college. Interesting woman - I remember when she was a conservative commentator - she underwent a transformation of attitude that left her doubting the GOP rhetoric and seeing government as an agent of good. Anyway, she had some interesting points - these are not verbatim, just paraphrasing: 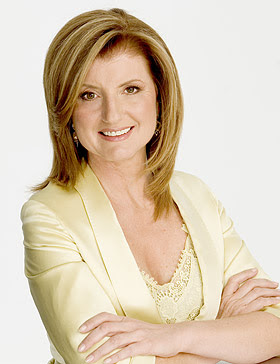 "Don't listen to polls - it's only a sample of answers from folks who are willing to pick up a phone call from some stranger, and then talk to them"

"The internet has completely changed politics. It's hard for a candidate to run away from quotes and appearances when literally everyone can watch it again and again on youtube. Remember - youtube didn't exist during the 2004 election"

Sadly I didn't get a photo with her - she had to catch a plane. Darn.
Posted by Mnmom

How cool that you've met those folks! I love the message that Palin is a know nothing. I'm so sick of her type of anti-intellectualism.

Was she a hottie in person?

her transformation is pretty interesting. i like her blog, but i wish she paid writers for their posts. she doesn't.

How cool. I enjoy listening to her, and remember when she made her big "switch" - it seemed so extreme at the time.

The points you cite are good ones to remember.
Dr. Monkey--she's not likely as hot as MNmom.

I too find Huffington's conversion fascinating. She's also turned out to be one of the most perceptive and interesting liberal commentators.