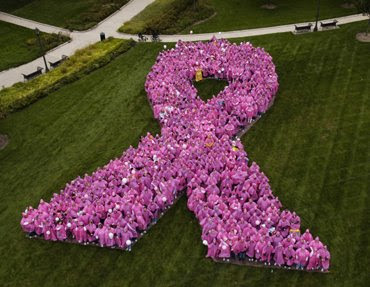 October may be the official month for Breast Cancer Awareness, but here on my blog that month would be May. Today, May 19th, 2008 I celebrate my five-year breast cancer survival anniversary!! A five year mark is a major point for a cancer survivor - it means that I am now statistically back in the general population.

I am a prime example why folks should be checking for common signs of cancer. There is NO breast cancer in my family so I never considered myself at risk. However, one day in April 2003 I was thinking about my aunt-by-marriage who had just gone through cancer treatment. As I showered I thought that day was as good as any to do a self-exam. And there it was - a little "blip", a little bump, like a small pea buried deep in my breast tissue. I went straight to the Dr. and they assured me it had none of the earmarks of cancer.

So on to a mammogram - my very first - I had just turned 41! The mammogram showed "extensive calcifications". Not usually cancer, but not usually seen in someone so young.

So on to a needle biopsy. I'll never forget just breaking down in tears after the surgeon left the room. I was scared to death, needing my parents, and needing some assurance. The ultrasound technician just held my hand and whispered words of comfort.

Three days later as my young daughters were playing happily with neighbor kids in the backyard, the call came. "It's Cancer". Nothing prepares you for that moment. You've heard folks talk about their blood turning to ice water? That's exactly how it felt. The floor dropped out from under my feet. "You'll need a mastectomy - there is no alternative". Another line I thought I'd never hear.

Luckily I was near some of the best health care in the country; The Piper Breast Institute at Abbott Hospital in Minneapolis. A dear woman at church heard about my diagnosis and called her sister who happens to be one of the best breast cancer surgeons in the state. Within hours I was under her care as well. The flurry of appointments with surgeons was overwhelming. At one point their lips were moving but I couldn't hear a word - I had just shut down. That kind ultrasound technician tracked me down, and said she'd been feeling so bad because the image on the screen didn't look promising.

My friends and family gathered around me and literally held me up during those days. I was flooded with calls, cards, flowers, and food - although I was so upset I couldn't eat. My youngest had her 4th birthday scheduled and my dear friend Lucy and her daughter made all the goody bags for the guests.

So on May 19th I had a mastectomy and sentinel node biopsy. Another stroke of luck - the cancer had not spread to the lymph system. Within weeks I had my first oncology appointment where I heard the marvelous words "No Chemo and No Radiation!".

Labels: cancer sucks, miracles, the glory of me

Oh, my god. You are even more amazing than I suspected. Congratulations on making it to five years - I hope you get ten times further away from this horror!

Wow! I had no idea! Thank God for your recovery and for His mercy. Congratulations and I wish you many more anniversaries such as this!

It just goes to show you that not even cancer can keep a good woman down. Way to go girl.

WOW. I had no idea either. Your story is amazing--it brought me to tears. My greatest fear is that something would happen to me before my girls are grown, leaving them motherless during their childhoods. I think about things like cancer much more now than I ever did before having children--I'm sure that's true for many. I can't even begin to imagine the horror and shock of getting that diagnosis when you did. But I'm SO GLAD your story has a happy ending! Congratulations on your five-year anniversary!

WOW!! That is fanstastic news!! Wooo hoo and much merriment!
You were such a trooper going through that whole ordeal. A real inspiration. I'm honored to be your friend.

I LOVE YOU! And congrats on the 5 year anniversary, the day we talked about so many times is finally here! YOU ARE AMAZING! XOXOXOX Shirley

Wow MC Hammer, I never knew that about you. You have an amazing story to tell. I'm going to go and start checking now. Because you just never know--we don't have anybody in our family either who has the disease! Girl you're an amazing story and a testament to true strength in a woman. I'm glad to know ya!

What an amazing story! I am so glad to read this- wonderful!!!

All good thoughts and wishes for good health and vibrant living to you.

And thanks for the nice comment on my blog!

A big WOW from me too! Welcome back to the general population!
Seeing as you are well above average in all other areas what a great way to be average.

Congrats on your anniversary. Early detection is very important.

HOORAY! You are an inspiration!