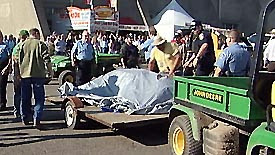 From Kare-11 news channel
"A bull escaped from its handlers at the Minnesota State Fair in Falcon Heights Friday, causing a brief scare as it ran free. The animal was being unloaded near the cattle barn around 9:15 a.m. when it was spooked and broke loose.
Witnesses say the animal ran down Judson Avenue, scaring dozens of people - some say the animal chased them. Somehow through all of that nobody was hurt.

The animal, running with its head down, was turning toward Clough Avenue near the Miracle of Birth Center when it struck a fire hydrant. The bull died instantly.

One witness said it was probably good that the bull died, saying that the animal would likely have hurt someone if it continued running."

I say good thing it died because the whole Miss Congeniality thing was so lost anyway.
Posted by Mnmom