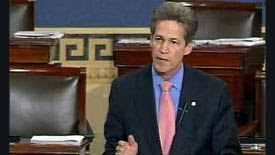 Sen. Norm Coleman, R-Minn., said he and Sen. Carl Levin, D-Mich., have asked the congressional Government Accountability Office to do a review of the national bridge program. "We need to look at all options, but I think it is important that we start by analyzing the shortfalls of our current program," he said.
Posted by Mnmom

Certainly that means that the current state of affairs can somehow be pinned on dems, right?

And he's still operating under the "if I don't make waves, I can be vice pres.or pres. someday."

I just found his proposal to organize a committee to evaluate blah blah blah. How about being angry that people died on a freaking BRIDGE smack in the middle of the US. That should cause outrage, not a bland call for yet another powerless committee.