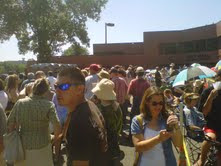 President Obama will be speaking 15 minutes away tomorrow in a very small Minnesota town.  Today the advance team was passing out 500 tickets for the event.  Johnny C and I headed out on the chance we could snag a couple.

I don't use this phrase often but what a CF.  There were about 800 people already in line, many who had been there since 2:30am.  The local  police department was trying to keep things organized.  The tiny town had been told only Wednesday this was happening.

People were calm and easygoing, but as the sun beat down and the temps climbed and STILL the line hadn't moved it was clear something was very wrong.  For some unfathomable reason they let over 900 people stand in the midday sun, near heatstroke, knowing they had only enough tickets for half of them.

Thankfully they arranged for portable bathrooms, but that was the only nod to actual human comfort.  Some enterprising locals were selling water for $2 a bottle.

After sweltering for over 3 hours, and holding pass #835 and #852 we decided to bail.  It was ultimately a good decision.  After 3pm they finally turned away over 900 folks.

But we gave it a good try and I have the sunburn to prove it.
Posted by Mnmom

The important thing is that you tried.

I saw on FB that you were wavering, good that you actually tried. I don't really know why it would be good, but I feel compelled to say that so you don't feel like your time in the sun was a total waste. =)

CF?? If I don't use that phrase three times before breakfast, I'm just not paying attention.

I saw him, very very briefly this morning get on his bus. I was around the corner, literally just half a block and didn't know it, where they had set up barricades and he came out and shook everyone's hand. So bummed I missed that opportunity! But I did get to see him and I did get to talk to some of his SS agents the night before at the Hotel Winneshiek! VERY EXCITING COUPLE OF DAYS FOR LITTLE DECORAH! Next up, King Harald of Norway in October! And lest we forget the wonderful, world-famous bald eagle family in this little town. Yep, it's great to be here!

My sister and hubs apparently got to see him. I wish I would have been able to. I'm with the others, kudos to you for even trying.

Drag. Sorry you didn't get tickets. It's funny, my daughter saw Obama speak to a handful of people on the Ped Mall in Iowa City for Earth Day before very many people even knew who he was. She came back home, all excited and wishing she was old enough to vote for him.She'll be able to this election, for sure.