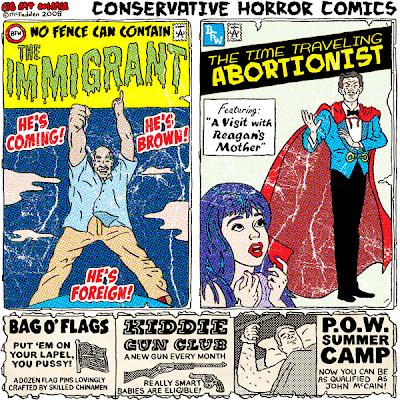 So now it seems science has discovered the reasons for liberal vs. conservative thinking.  Read articles here or here.

To paraphrase: "The brains of people who call themselves liberals tend to have larger anterior cingulate cortexes than the brains of people on the opposite side of the political spectrum, the study showed. The anterior cingulate cortex is a collar-shaped region around the corpus collosum, a structure that relays signals between the right and left hemispheres of the brain.

What about conservatives? Their brains tend to have larger amygdalas. The amygdala is an almond-shaped structure located deep within the brain.
Based upon what brain scientists know about the function of the two brain regions, researchers believe the structural differences support the notion that liberals are better equipped to make sense of conflicting information while conservatives are better able to recognize a threat.

So what does this mean?
I think it clearly explains why simple facts won't work on conservatives.  They see or hear something, label it a threat, act on those impulses, and make decisions accordingly.

So I think we have to meet them where they are.  We have to approach subjects such as gay marriage, environmentalism, military budget cuts, reproductive rights, etc. and promote the inherent safety of these ideas.  We have to help them see there is nothing to fear.  We have to neutralize the threat so they can think more clearly.

What do you think?
Posted by Mnmom

I think without fear there would be no Republican Party.

Very interesting findings. Your idea makes sense except to Charlene's point, the GOP LOVES feeling fear! Or at least spreading it.

Since I am not a lemming here...I will offer my two cents on this. First of all, this is old news. Second of all, wasn't it the liberals who said we need to be more civil to one another after the Gabby Giffords shooting? What's the point here? It's pretty obvious to me there are two schools of thought and they should BOTH be respected. No one side is right or wrong, they are just different. Why can't you all just respect that?

I think we beat them at their own game and scare them into believing that a threat is more likely if they DON'T support gay marriage and environmental concerns and such. Fear monger for civil liberties! Fear monger for gay rights!! Fear monger for social security- well, I know that works because I've worked in a bank and if old people thought for a second someone might take their check away...watch out!!

Not right or wrong, just different? Give me a motherfucking break.

If the technique works then I am all for it. :)

Yeah-MEN to Kirby. Damn how did someone with a big amygdala show up here?

Girl why do you always have the answer to everything. You need to run for office. MC Hammer in 2012. To hell with Sara Palin, insead of a bus tour, we'll do a mini-van tour! Around the country, drumming up support from soccer moms and the like. If Sara can run, without knowing whose side Paul Revere was on, you've got a shot!

Margaret, You and I know I lean towards conservative thinking...and all the Bible stands for...I always will. My brain can't or will never compare to your high IQ and all that your knowledge represents...It just never will. And I accepted that along time ago. Instead, I decided I'm going to do the best with what The Good Lord has given me. I care for people just like you do. I love being a RN. I loved serving in the military for 20yrs. I'm not a reader. I never will be. Please don't think I'm not informed. I truly am not a fearful person....It's just not in me....Even flying into Iraq to pick up our wounded. Either way I felt protected. Hope you have great days! And as always I hope nothing but the best for you and yours. Take care, Mary.

Hmmm. Interesting comments on this one.

To "Motherfucking" Kirby...I don't believe it's "right" to kill a baby in the womb. That's not fear...that's called morality. I don't think it's "right" that the definition of marriage, which has ALWAYS been the union of a man and a woman, should be changed to include same sex people. Civil union, domestic partnership...no problema but it's not a "marriage." It's not fear...it's called tradition, a word that seems to scare the crap outta liberals for some reason. I'm so sick of you liberals thinking you are so "enlightened."