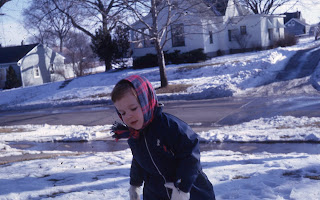 Like I said, get ready for a year of old family slides.
Above we have me, age 2, in Marshalltown, Iowa. 1964 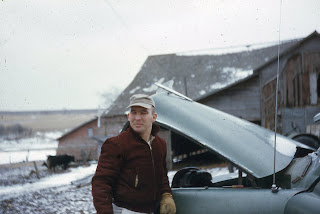 My Dad, at my Mom's family farm in extreme northern Iowa. Probably about 1957 or 58. Right about the time he graduated from Iowa State. 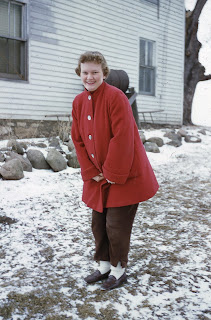 My Aunt Mogul - living with my grandparents on the farm while Uncle Sam was stationed overseas. She was about 8 months pregnant when my Mom photographed her walking to the outhouse. 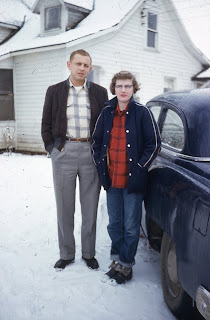 Uncle Relaxed and Aunt Teacher at the farm 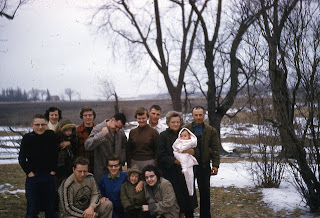 Group photo at the farm. My Mom is kneeling in the bright blue sweater. My Uncle Smartass is pretending to hit her. On the far right are my wonderful grandparents Gie and Ginny holding my beloved cousin Sarah. 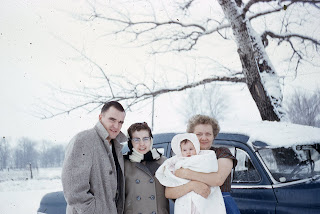 Grandma Gie holding Sarah, with Uncle Smartass and Aunt Successful. In later years, Uncle Smartass became known as Kojak for his resemblance to the TV detective. 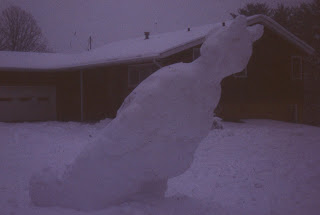 A gravity-defying snowman from the 1970's. 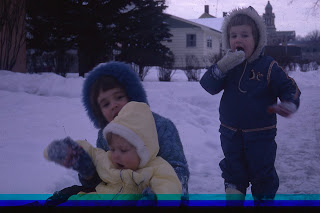 Youngest sister, me, and Cheesecake Maven in Decorah, Iowa. Probably 1967
Posted by Mnmom

Love these, especially the one with your dad in front of that barn.

Those these pictures, and I love the names for the relatives!
Outhouse? 8 months pregnant? What am I complaining about!?

I second what Anita said. No way would I want to be 8 months and going outside to the outhouse! But those were the good old days, eh?

Great photos, and I always wonder what our parents and grandparents would have thought about us being able to post these photos nowdays with the possibility of the whole world to see?!?

So, so wonderful. I love these. I think we all have an Uncle Smartass.

I LOVE old family photos! Even if it's not my family!

These are classics. Hey, my hubby was in Decorah in 1967, in college.