A Creep for a Veep? 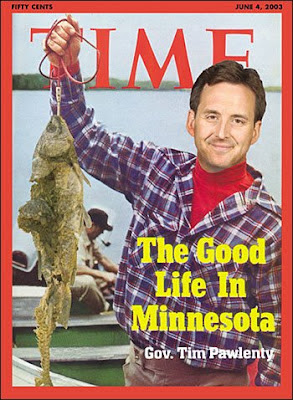 So John "I don't know how to send email" McCain is considering the Governor of Minnesota, Tim Pawlenty, for his running mate? For those of you who don't live in Minnesota, let me introduce you.

2. While he cries "no new taxes" most Minnesotans are suffering oversized classrooms, collapsing bridges, decreased police force, decreased fire-fighting capabilities, and an increase in state fees across the board. Because his administration refused to up the state's education budget, homeowners like us saw a HUGE increase in our property taxes just to staunch the bleeding in our public schools.

3. He has a problem with his vocabulary. He increases "fees" on many services but claims they aren't a tax. No one is fooled.

4. He absolutely LOVED taxing the residents of Hennepin County (city of Minneapolis) without a referendum for a new Twins Stadium because poor little rich owner Carl Pohlad didn't want his own bucks tied up in his own stadium.

In his own words on his Truth in Taxation plans - "If significant dissatisfaction is registered, a levy referendum on the amount of increase above a certain level will be triggered. We've got to trust the people. So once again I ask the Legislature to pass a carefully drawn and limited form of Initiative and Referendum. We need to allow the people the chance to directly speak on the major issues of the day."

Unless of course those people are actual residents, and you are actually talking about their money.

5. He vetoed a powerful piece of legislation that would have allowed homeowners facing foreclosure some relief, and would have forced Minnesota mortgage companies to work with these folks. He "felt it wasn't Government's job to interfere with private contracts". Minnesota is facing a mortgage/foreclosure crisis of EPIC PROPORTIONS! Entire neighborhoods are going down the tubes. And since when do Republicans not want to interfere in private contracts?? They LIVE for that stuff!

Read this article for a reference to the above picture. Minnesota used to be a glowing example of the good work taxes can achieve, and what a liberal government can provide it's people. Now that's democracy!

More insight ahead as I come across the details.
Posted by Mnmom

nice post, but now I feel sick. Can you go back to writing about coffee?

He lives mere blocks from my parents and he frequents the Eagan Taco Bell! All class.

I worked at the Mn Dept. of human Services when he took office. He came there and stood in front of the whole building of people and said with all the charm in the world, as if he were giving us a gift: "My hope is to cut 30% of the jobs in this department, if not more!"

And he has been known to say things like "Why should the government offer the Cadillac of health care packages for it's employees?".

TOTALLY AGREE!!
I've done a couple of posts on the dishonorable Mr P too.

He has also STOLEN MNCARE funds for his pet projects. MNCARE was operating in the black and was preparing to add more uninsured Minnesotans to the plan UNTIL Pawlenty stole from the fund to balance his budget.

Schools, nursing homes, fire and police departments have all suffered from his policies. NOW our court system is foundering. It's now next to impossible to get a public defender thanks to the CREEP'S cuts!

I personally want the Creep to be Veep. It'll get him the h*ll out of MN!

He sounds like a perfect match for McCrusty.
Thanks for the "heads up" on this one.

The creep grew up in SSP...went to the HS I teach at...he was the speaker at dds graduation in '03... I didn't like him then and I really don't like him now! But we don't care if Mcpuke picks him because there is no way they are going to DC...is there?

Argh! I can't STAND him. However, I know in my heart we're going to have a Democrat in office come January '09. Go Obama!

MC Hammer, I'm gonna call the Star Tribune to see if they can get you on as a political columnist. This is the best descripion of Tim Pawlenty that I've ever read. I'm gonna make a copy and send it to his wife. When he croaks, she should use it for his Obituary!

They won't make it to the White House, which is great news for all of us, but horrible news for Minnesotans trying to get rid of him.

This is pretty silly, but I was just doing some legislative research for my thesis and look at this letter for T-Paw's signature: http://www.governor.state.mn.us/stellent/groups/public/documents/web_content/prod008906.pdf

It sort of cracked me up. He doesn't cross his main 'T'!

Oh, and I went to high school with his cousin and her father, T-Paw's uncle, would not vote for him or interact with him. I always thought that was sad. That was back when he was a state legislator for Eagan.

With a record like that I hope Bush McCain does make him his veep.

oooo, no. No, No, No. Perhaps the fish in the photo would make a better candidate.