Sometimes we all go soft in the head 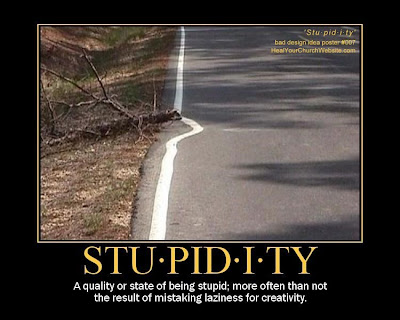 We've all been there. That moment when you realize you need competent adult supervision. I have personally witnessed or known the folks involved in the following. And TWO of them I have done personally. I will send a small prize to whoever guesses the correct two. My sisters are disqualified, as is MG if he calls my sisters and gets the answer.

1. Found a dead bird in their screened porch and stated that they needed to fix the hole so more dead birds wouldn't get in.

2. Stated at a tailgater that the tent should be moved into the sun to provide more warmth under the tent.

3. While leaving a restaurant, had a good laugh with their spouse about idiots that drive off with stuff on their car roof, then immediately left the parking lot with all the leftovers on the roof.

4. Received a traffic ticket for driving their motor scooter erratically and without a helmet. They were driving erratically because they were trying to balance their helmet on their lap.

5. Put a garden hose down the sewer line because it was clogged, and caused the clogged sewer line to back up and coat the room with, well, sewage.

7. Was fascinated by the car's shattered windshield following an accident, so ran their fingers down the shattered glass.

8. Told his kids his wife has crabs because he thought it was the same thing as chiggers.

9. Drove straight into a setting sun insisting they were driving East.

10. Spit chewing tobacco juice continually into a beer can, then mistakenly took a big swig thinking it was their actual beer.
Posted by Mnmom

Labels: Americans are crazy, I have issues

LOL, some of those just make you want to gag, but most you just shake your head.

thanks for the chuckle but that last one--eewwww!

I'll say you've done #3 and #6. For your husband's sake, I hope he wasn't the one who told the kids you had crabs.

Rolling on the floor...yadda, yadda, yadda...
Oh Sis, how I miss our father...and others....THANKS for the memories.

I say you've done 2 and 3. I do that kind of stuff quite a bit, actually. But I blame it on residual brain damage from years of baby/toddler-induced sleep deprivation.

Did you know that you can shorten your long urls with LinkShrink and make money for every visit to your short links.