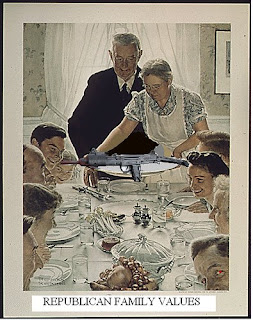 During U.S. House consideration last week of a bill to grant federal employees four weeks of paid leave after the birth or adoption of a child, Republicans (who hail themselves as "family friendly") had some choice comments. A not-so-compassionate conservative Rep. Pete Sessions (R-TX) sarcastically suggested, "Maybe we just ought to let federal employees take 16 years off!" Rep. Chris Lee (R-NY) said the bill provided "more generous fringe benefits" for federal employees, and some Republicans even suggested that employees might have or adopt children just to get four weeks of paid leave.

The bill passed the House after a mostly party-line vote.

What a great bunch of family-friendly people!
Posted by Mnmom

Labels: Conservatives are wrong all the time, I hate neocons

Man, I will never understand how this kind of action goes misunderstood or unquestioned by so many unengaged voters.

I know that I had my kids just for the maternity leave and cut in pay while I was on short-term disability.

The right is all for the "theoretical family." Real families though, can suck it.